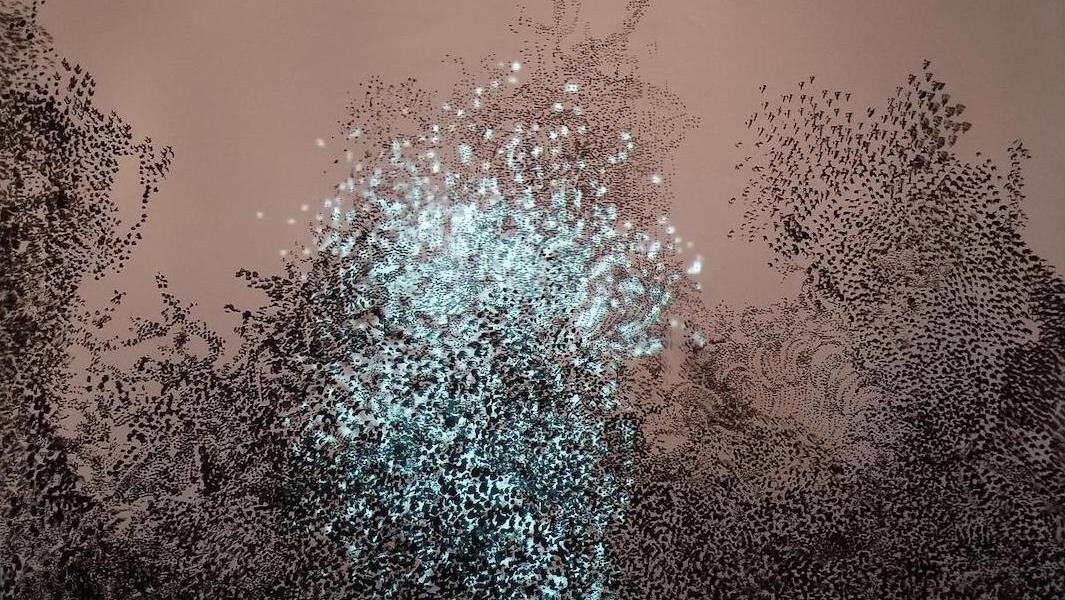 Continuing the participatory work Ombres d’exil, Montréal (2019-2021), which described the relationships woven by certain exiled women through their experience of drawing and the socio-political invisibilization often experienced by them, this DÉMO by Camille Courier [student member, UQAM] explores and maps the resonance of her gesture with archaeological drawing, crossing digital motion capture and traditional large-scale drawing.

This research-creation residency first mobilizes drawing, but also scientific imagery and archaeological artifacts, thus beginning a series of moving drawings entitled ArcheoMocap. The aim is to trace the overlaps and seismicity of the movements of drawing and excavating; to understand the aesthetic, poetic and socio-political forces present in the history of lines (Ingold, 2011) and the clouds of points thus produced. Whether these lines are of flight or of becoming (Deleuze, 1980; Deligny, 2007), the goal is to grasp if, and how, certain gestures of drawing, modeling, and digging modulate our ways of creating drawing in motion. This research-creation residency is the occasion of an interdisciplinary collaboration with anthropologist and visual artist Francine Saillant and mobilizes modes of operation and drawing gestures specific to archaeological research.

This project is the last part of Courier’s doctoral program in research-creation and is based on the emergence of “transagir”, a concept that came out of her thesis-creation. Her research ground is located in the field of “expanded drawing”. Her drawing practice has developed through the hybridization of drawing gestures from the field of visual arts and drawing gestures invented and practiced for the stage, as a result of an assiduous professional practice in archaeological drawing, and then in the field of performing arts. Gisèle Trudel (Artist, Professor at the École des arts visuels et médiatiques, UQAM) and Marie-Christine Lesage (Professor at the École Supérieure de Théâtre, UQAM) co-directed her thesis in research-creation.

The current phase, entitled Dessin : ombres de gestes (Drawing: Shadows of Gestures) extends a previous phase of her research-creation on the resonances arising from the sharing of her drawing practice with people affected by current migratory movements, in particular those linked to the consequences of climate change. The artistic and political stakes of these journeys of exile, as they can be performed in certain drawing situations, mobilizing cartographic and demographic data, constituted the first point of departure of this research-creation.

A second phase is the result of her encounter with the diversity of the recourse to drawing according to the contexts of research. Whether the environment is considered from an artistic, scientific or political angle, it is a question of engaging with drawing as an operator of research. Reflecting on our relationship to the ground, in the archaeological modes of operation in drawing. The research-creation Archéopoétique 1, initiated by the anthropologist and artist Francine Saillant (Centre Cultures, Arts, Sociétés, ULaval) on the occasion of a residency in an archaeologists’ laboratory, which gave rise to an exhibition created in the Musée archéologique de l’Ilôt des Palais, in Quebec City (summer 2021). This installation, created collectively from the platform proposed by Saillant, pointed out avenues of exploration in the field of drawing in motion. It is these emergences that Courier explored during this residency. Juliette Lusven, a student member of Hexagram, also collaborated in the development of this residency and exhibition-demo Dessin : Ombres de gestes.

Camille Courier : After studying drawing and painting at the French art school, Ecole Nationale Supérieure des Beaux-Arts in Paris, Camille Courier developed a practice of “extended drawing”: large-format installations, often created in situ. The main association is a drawing gesture accumulating a large variety of dark dots. The central subject of her artistic work explores the links between drawing gestures and images as a shadow of human body.

Since 2003, Camille took part in various collective and solo shows. Some of her large-scale drawings were chosen for public artistic commissions and are now in private collections in France and Canada. The artist also carries out projects specially designed for performing arts. Through the numerous collaborations with visual artists, theaters and dance companies, she could create drawings for various stages.

Since 2015, Camille had a chance to be involved in a university research-creation process at the Doctorate in Arts Studies and Practices, at the University of Quebec in Montreal (UQÀM) in Canada. She initiated digital drawing projects with non-optical motion capture processes, with the technological support of the Hexagram Réseau de recherche-création en arts, cultures et technologies . The grants her work had obtained over the last 5 years led her research-creation to study certain low-tech, eco-responsible processes to perform large-format drawing gestures and exhibit them as moving dot clouds, often designed in dialogue with specific public spaces. The dynamics of this doctoral research-creation led Camille to teach at the Faculty of Arts of UQÀM.

Francine Saillant is an anthropologist and multidisciplinary artist. Professor of anthropology at Laval University, she has been developing a practice that combines installation, writing and video for the past ten years. She is an art film director (Créateurs de liens [2019]; Apparaître [2021], with F.- H. Levy), has had collective and solo exhibitions and has recently turned to installation (Bienveillantes, 2019; Archéopoétique, 2021). Her theoretical reflection proposes an articulation between art and anthropology.