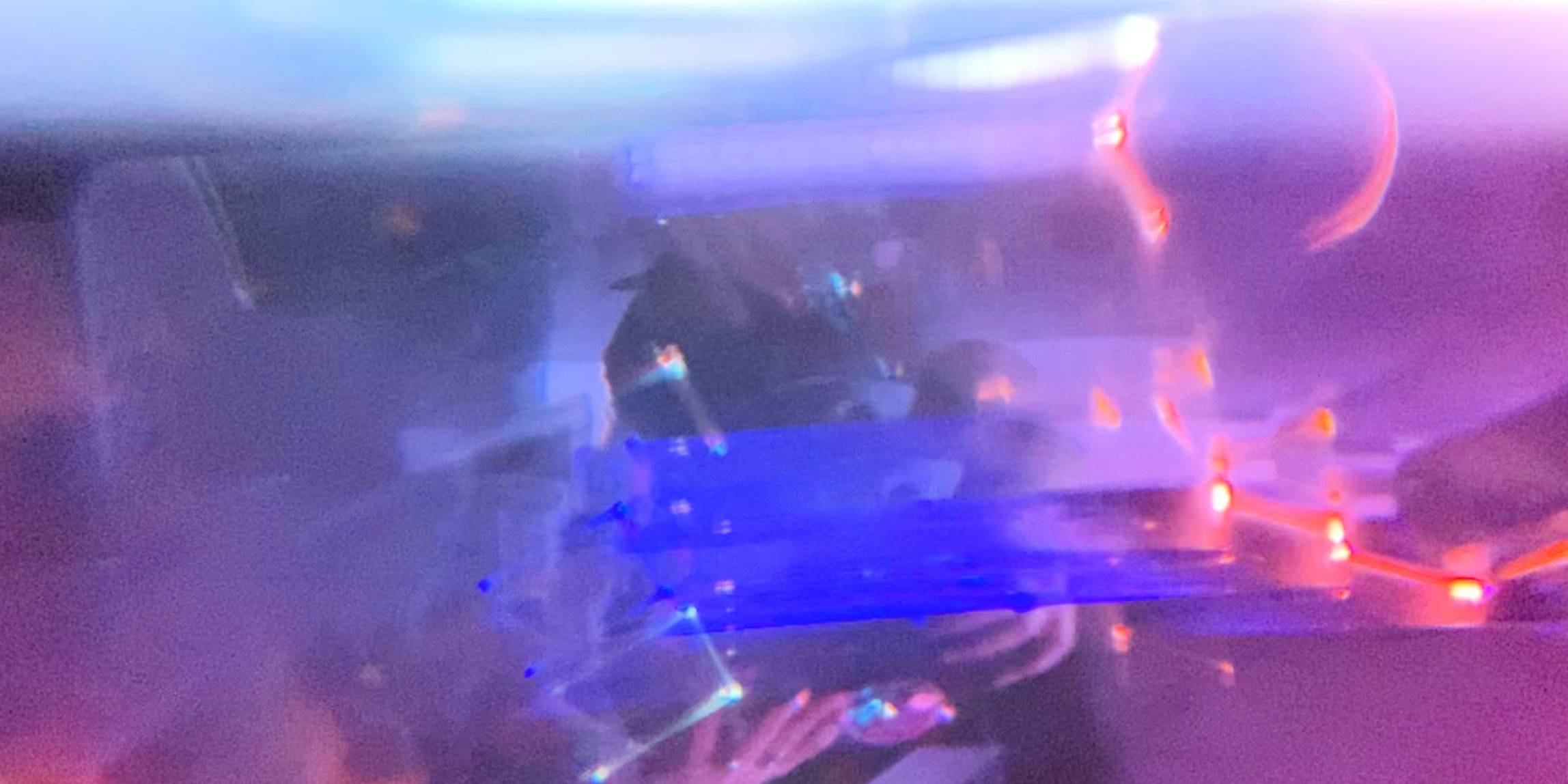 devenir-lumière is a research-creation project that took the form of a series of interventions carried out in the spring of 2022 by catherine lejeune [student member, UQAM] during a residency at Hexagram.

As capitalism mutates into neoliberalism, biopowers are replaced by psychopowers (Han, 2016). Rather than controlling/monitoring the body of the proletariat, institutions are now targeting the consciousness that provides the majority of economic production. In this competitive context where humans are isolated, hyper-responsible and overworked, depression and anxiety become endemic disorders (Berardi, 2005).

This project aims to deepen the reflections on the roles and potential of research-creation that I have undertaken in the context of my master’s thesis. Does art have the potential to thwart the current devices of power? Could a work of art counteract the lack of feeling that is caused by the technopolitical context that has been exacerbated since the pandemic? Is it realistic to think that an artistic practice can contribute to improving the world?

The space and resources offered gave me the opportunity to test whether my research hypothesis could answer these questions. More specifically, this residency allowed me to play with materials that interact with light and to experiment with the hallucinatory effects of strobes on my mind. The goal was to observe if these interventions would allow me to alter my consciousness and induce a state of deep well-being, close to that which can be contemplated during transcendental meditations (ter Meulen, Tavy and Jacobs, 2009).

While staring at a strobe light with my eyes closed for several minutes, various interesting perceptual phenomena appeared before me. I first noticed fluorescent circles and pixels that became more complex the more I observed them. After five minutes, I could make out precise geometric shapes with bright colors, which were organized and moved in the manner of a kaleidoscopic mandala. These fractal manifestations rotated on themselves at a fast enough pace to induce a feeling of vertigo. After a dozen minutes or so, I eventually felt a sense of total, but comforting emptiness.

This experience reminds me of the probing techniques that can be traced back to ancient Egypt that allow access to intuitive or psychic visions. For example, I think of the one where one simply runs a hand quickly past the light of the sun or an oil lamp (Haill, 2014). In several cultures and up to today, related techniques exist that allow access to this divinatory phenomenon.

With the invention of the electroencephalogram in the early twentieth century, various research communities became interested in the physiological effects of photic stimulation on the mind (ter Meulen, Tavy, & Jacobs, 2009). Although the origin of these mental images remains misunderstood, the dialogues that have since been exchanged between scientists and artists have nevertheless led to the realization that strobes act as a non-pharmacological means of inducing altered states of consciousness (ASC) (Haill, 2014).

By this opportunity to confirm the probability of my hypothesis, I will continue the analysis of my research subject with confidence while knowing in a situated way what are the sensations and the impressions felt during a stroboscopic stimulation. It will be possible to follow the evolution of this project on my website.

catherine lejeune (she, they, them) is an artist-researcher born in Tiohtià:ke/Mooniyang/Montreal. Inspired by their studies in psychology and the art movements of the seventies, their media art and installation practice aims to develop a transversal dialogue between politics, technology and consciousness. A Master’s candidate in visual and media arts at the Université du Québec à Montréal, lejeune has shared their work in various galleries, conferences and residencies in Canada and Europe.

catherine lejeune would like to thank the Hexagram network, its director Philippe-Aubert Gauthier, Jason Pomrenski and his team as well as Jonathan Labrecque Poirier for the precious support offered for this project.