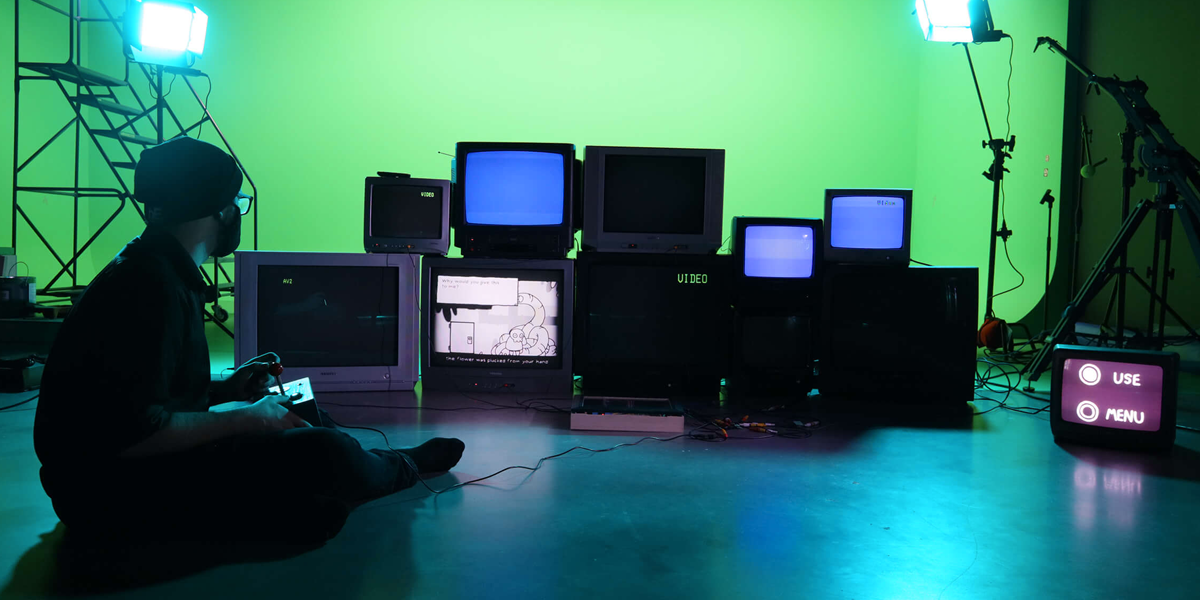 With Compartment_Complex, an interactive multi-screen video installation, Ké Medley asks: how does one subvert analog video’s obsolescence to engender new forms of mediated experience and prevent its eclipse from media history? In appropriating and subverting the aging aesthetic of CRT televisions, his primary objective is to better understand the implications of obsolescence and explore new ways of experiencing materiality.

Medley’s research places itself firmly in the field of Media Archeology. Materiality is a fundamental component of his research, where he investigates both the technical and cultural components of past media objects such as analog video. He is particularly interested in artifacts of mundane life or bygone eras, putting an emphasis “on the forgotten, the quirky, the non-obvious apparatuses, practices and inventions” (Parikka, 2013).

However, obsolescence devours media history at an astonishing rate, especially electronic media history. Analogue video is quickly being eclipsed by the ravenous tide of time and digitization, to such an extent that Nam June Paik’s use of CRT televisions seems today like a window to the past. The obsolescence of analog video has resulted in a new category of trash, composed of objects which are totally functional, but readily discarded. Though still useful, cutting-edge technology is rapidly obsoleted, creating mountains of junk to be shipped off to countries who cannot afford to refuse it.

Media Archeology, as such, acts as a form of retention and stands in complete contrast with models projected by tech industries. It looks at media “in terms of their long-term relations that radically steps out of the short-term use value that is promoted by capitalist media industries.” Parikka, 2013) Indeed, planned obsolescence is particularly prominent in most major tech enterprises. This insidious practice encourages the consumption of new products by rendering legacy software and hardware nearly unusable/unreadable. This attitude toward capitalist enterprises is similarly found in Junk Art and Dadaist movements (Causey, 1998). Artists such as Arman have demonstrated that culture is clearly reflected in the things it throws out. This is doubly true for video media; from home-movies to commercial programming, video has proven itself a solid illustration of society – our hopes, fears and the lies we tell each other.

Compartment_Complex is the manifestation of the artist’s compartmentalization of certain aspects of their life and psyche. As we approach the haphazard stack of CRT televisions, wires strewn wildly about, the electric buzz of CRT monitors swarms our ears. A small CRT screen, set apart from the main stack, displays a series of pictographic instructions on operating the “video game”. Using a small controller adorned with a classic arcade joystick, the “player” takes control of a bizarre avatar as they navigate between the installation’s screens. Each monitor represents an individual room of a gloomy, monochromatic apartment complex, populated by unsettling denizens. The sounds of dripping faucets and murmuring neighbors echo throughout the installation. The players explore the rooms, collecting and exchanging items with the denizens who respond with weirdly cryptic and poetic dialogue. The players are left to piece together the perplexing events of their experience, constructing their own narrative.

This DEMO is presented as part of COMPOSITE #26, co-organized by Molior, Hexagram, MAPP MTL and the Montreal Sciences Centre. COMPOSITE is a bimonthly networking event dedicated to digital creativity. This event aims to create a recurring meeting space between the art world and the industry of the digital sector, by encouraging the meeting and pollination between creators, artist-run centers, organizations, businesses and digital professionals.

This autumn, as my time at university winded down, I was invited to do a residency at Hexagram. The residency took place over the first two weeks of September and I was set up in a space called “la chaufferie” right in the middle of UQAM’s Cœur des Sciences.

Thanks to the resources and space provided by Hexagram, I was able to truely improve and polish my installation “Compartment_Complex”. With the help of playtests, I ironed out several bugs and added a considerable amount of new content to the experience.

Medley is delighted to invite you to watch the roundtable discussion he organized to close his residency with Yan Breuleux, Louis-Philippe Rondeau, Samuel Meech, Oli Sorenson, Ayam Sabah, Sonya Stoeva, Dimo Ivanov and Stephanie Castonguay, artists and professors from UQAC, UQAM and Concordia.

And some pictures of the new installation…

And here’s his supervisor, Louis-Philippe Rondeau [co-investigator, UQAC-NAD], in action!

Ké Medley is a Canadian artist completing a master’s degree at NAD-UQAC University in Montreal under the supervision of Yan Breuleux and Louis-philippe Rondeau.

In his work, Medley playfully tinkers with novel assemblages of various media objects, creating unique mediatic experiences. Interactivity often takes center-stage in his art, evoking a desire to implicate others in the artistic process – to bring people and art closer together. Often fueled by nostalgia, Medley approaches the materiality of media objects as a way to preserve and interact with the past – both in terms of personal and mediatic history. While still very interested in the technical components of media objects, Medley is also intrigued by their personal significance – what TV, video games, movies, technology and other media mean to us on a more personal or cultural level.

All images are from Ké Medley.
If you have any question or would like to get in touch, please feel free to contact him : kmedley1996@gmail.com