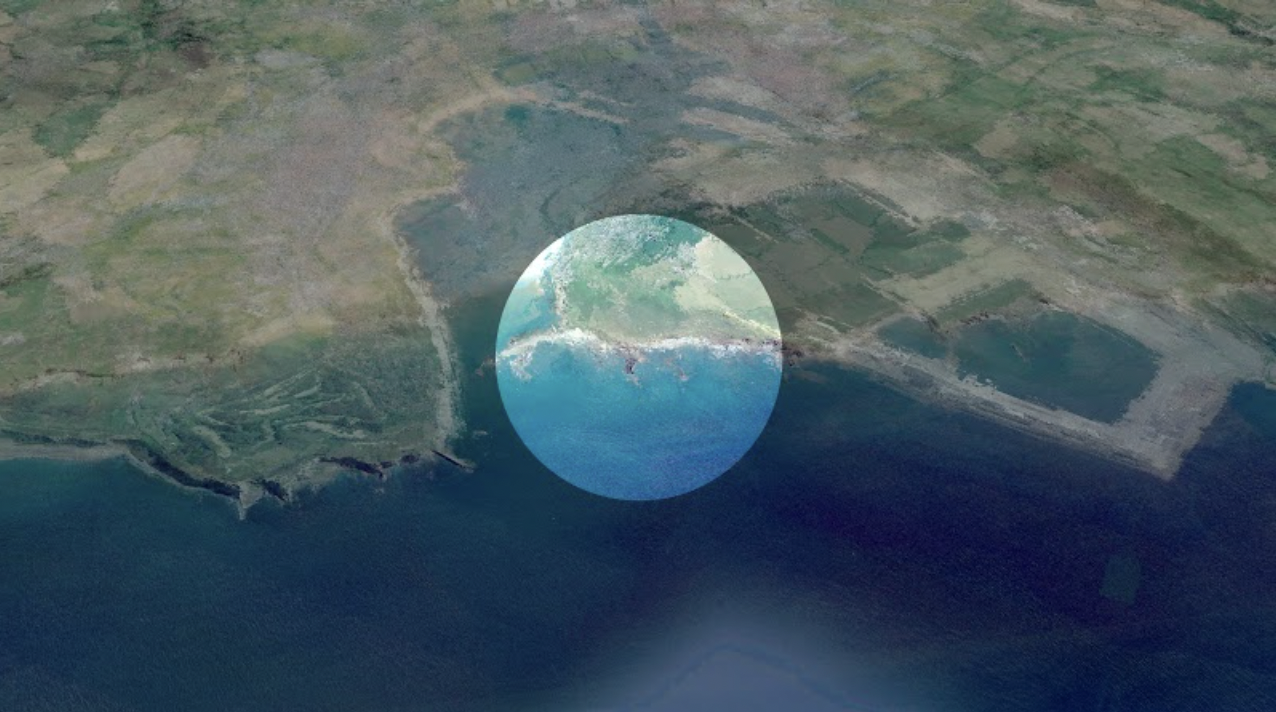 Juliette Lusven’s [student member, UQAM] doctoral project Exploration.135 is part of a processual and installative approach to research-creation and includes several phases of development since 2018. Entitled Visions Transatlantiques, the latest version of the project is the subject of an exhibition at the ELEKTRA gallery – at “de Gaspé” hub, from January 20 to February 26, 2022.

The image presented on the cover, which also refers to the communication of the exhibition, corresponds to a detail of the installation. This is a still image of the projection of the morphing of the terrestrial connectivity points (arrival points) of the last transatlantic telecommunication cable “Grace Hopper”, operational since 2022, connecting the United States (New York) to Spain (Bilbao) and the United Kingdom (Bude). Acting synchronously with the underwater topographic line in the exhibition space, “this cable is named in honor of computer pioneer Grace Brewster Murry Hopper (1906-1992)” (Google, 2020) often known for her key role in the development of computer programming, such as COBOL or formerly FLOW-MATIC, one of the first data processing languages.

Juliette Lusven’s research-creation explores our relationship to the world and to technological interconnectivity based on Internet’s current underwater infrastructure. Evoked as the “backbone” of our connectivity (Starosielski, 2015), as almost all of our digital exchanges transit through this vast network of fiber optic cables installed at the bottom of the oceans, this infrastructure seems equally imperceptible (Blum, 2013), referring to an often inaccessible underwater environment while continuing to open up a broader reflection on the opacity of digital materialism and its infrastructural terrestrial relationship. The project exhibition at Elektra Gallery, explores this phenomenon of invisibility and circulation from the Atlantic Ocean and the Web by seeking to articulate different materialities and scales of relationships in the implementation of an installative corpus.

« “Amitie” is also a recent transatlantic cable installed in the last few months. With a length of 6800 km, it connects the United States (Lynn, Massachusetts) with Europe (La Porge in France and Bude in the United Kingdom), as well as “DUNANT”, or “Havfrue / AEC-2” to Ireland and Denmark. Many cables have been installed recently and many more are still to come, such as the “LEIF ERIKSON” (2024) which will be a cable running directly from Canada at Goose Bay to Northern Europe south of Norway, leading to new historical and geographical projections. They are part of the new generation of optical transmission technologies. As data traffic and demand for information connectivity around the world continues to grow in recent years, the laying of transoceanic cables continues to expand. In this sense, the Atlantic Ocean has become an essential medium for the deployment of this infrastructure and thus our relationship to technology.

In this project, the cable routes become a framework for geoperceptive and computational exploration of this hyperconnectivity, inviting us to relate flows, data visualization and satellite imagery with microscopic captures of technological residues, sediments and microfossils from the bottom of the Atlantic Ocean, opening up a broader reflection on the relationships of scale and the experience of materiality.

This installation process takes the form of two projections and several interconnected screens on the ground with their cabling. The large TV screen on the floor and the two projections are generated from a computer program developed specifically to “explore” the underwater infrastructure of the Internet, its connectivity with the terrestrial landscape and its visualization process in the exhibition space. Titled “Sonder (le monde)” the current version of this program is generated from the Atlantic Ocean and the many transatlantic cables that cross it, such as:

It allows to interconnect the projection of a luminous flow representing the underwater topography of the telecommunication cable routes from the data available on the Web (Telegeography, Infrapedia) and other geographic information systems (SIG) with a second projection which morphs the satellite images (Google Earth) corresponding to the position of the terrestrial arrival points of these same cables with the coastline. The projected images aimed at connecting with the terrestrial landscape metamorphose to the extent (in synchronization) of the luminous trace of the topographic path of the other projection and of the flow of underwater geographic coordinates visible in the exhibition space.

It transmits, references and displays in real time the metric information related to the elaboration of the two projections (topographic data flow, document files, city and country of connectivity, cable mileage, speed, year, deepest seabed position for each route). This dashboard also connects to several other small screens in the field. These highlight the analysis, observation, and connection of remote cable residues and North Atlantic seafloor sediments from the microscopes of the UQAM geoscientific laboratories (GEOTOP Centre de recherche sur la dynamique du système Terre) en micropaléontologie sous-marine and comes directly from the underwater environment crossed by the teletransmission cables.

On one side, a small screen on a stand exposes successively observations made with an optical microscope and polarized light, of technological residues (slice and powder of optical fiber, copper and rubber) with residues of marine sediment containing oceanic microfossils ( radiolarians ,  diatoms  et des coccolithophoridés).  While the other two screens close to the ground present SEM (scanning electron microscope) analyses of a sample from a sedimentary core from the North Central Atlantic Ocean. The microscopy technique is no longer optical, but electronic, resulting in a computer scan over a long period of time the surface of the sample and capture the different microfossils preserved inside ( foraminifera, grains de pollen, dinocyst, ostracode, tintinnida).

These microfossils are analyzed in disciplines related to oceanography (climatology, geology and underwater micropaleontology) to better understand the nature of the environment. They constitute unique bio-indicators of past physico-chemical environmental conditions and act as “fossil archives” specific to the materiality of terrestrial and oceanic space. As Gwenola Wagon and Stéphane Degoutin reminded us in their film World Brain (2015), “At the bottom of the oceans, on the seafloor, fiber optic cables live next to fauna and microorganisms. The idea is to observe these relationships from a perspective close to media geology (Parikka, 2015). The infrastructural perception of the digital can be explored in this subterranean or underwater reality (Starosielski, N, 2015) by continuing to question how the digital circulations are to be conceived from these environments.

Juliette Lusven is a French interdisciplinary visual artist-researcher living and working in Montreal. Her work is motivated by questions related to the materiality of images, their process of capture and transmission.
Her exploratory and processual approach is often inspired by geosciences and perceptive and technological visualization processes in relation to terrestrial and oceanic space. At the crossroads of different forms of installations, montages and projections, she questions our relationship to the world in relation to technology, materiality, flows (natural and artificial) and scale relationships in a problematic of perception. She is interested in the interconnections that occur between natural and technological phenomena in order to explore their visual and experiential resonance as well as their informational, environmental and imaginary resonances.
She is currently pursuing a PhD in art studies and practices at UQÀM and since 2020, an experimental residency at the GEOTOP laboratory in underwater micropaleontology. Her work is supported by HEXAGRAM, and was recently presented at the Agora Hydro-Québec, at the Nuit des idées de Montréal (2020), at the MUTEK en ligne festival (2021) and at the Elektra-BIAN gallery (2022).

Max Boutin is a multidisciplinary artist-researcher-skater developing the concept of texturology. His artistic practice materializes through video, sculptural, photographic and sound installations. It is inspired by skateboarding, animating a need to transpose the sensory experience of a vertigo : the one we seek.
He holds a master’s degree from the Montpellier School of Fine Arts in France (Mo.Co) and is now pursuing a PhD in art studies and practices at UQÀM (Université du Québec À Montréal). Her research is supported by the Hexagram network and the Fonds de recherche du Québec, société et culture (FRQSC). His work was presented in the festivals: Mutek (Montreal), Ars Electronica (Austria), Nova (Romania).

Marc-André Cossette is a transdisciplinary Canadian artist who articulates technology and performing arts using sound, visual and interaction design. Marc-André holds a bachelor’s degree in interactive media and a master’s degree in experimental media (UQAM). He is currently pursuing a PhD program at Concordia University in which he is exploring the use of Artificial Intelligence and Artificial Life algorithms to create generative dance performances. In addition to his research-creation practice, Marc-André has collaborated with several artists as a sound, visual, interaction and stage designer. He is also the co-creator and co-host of the REC podcast series on research-creation produced in collaboration with CHOQ.fm and the Hexagram Network.