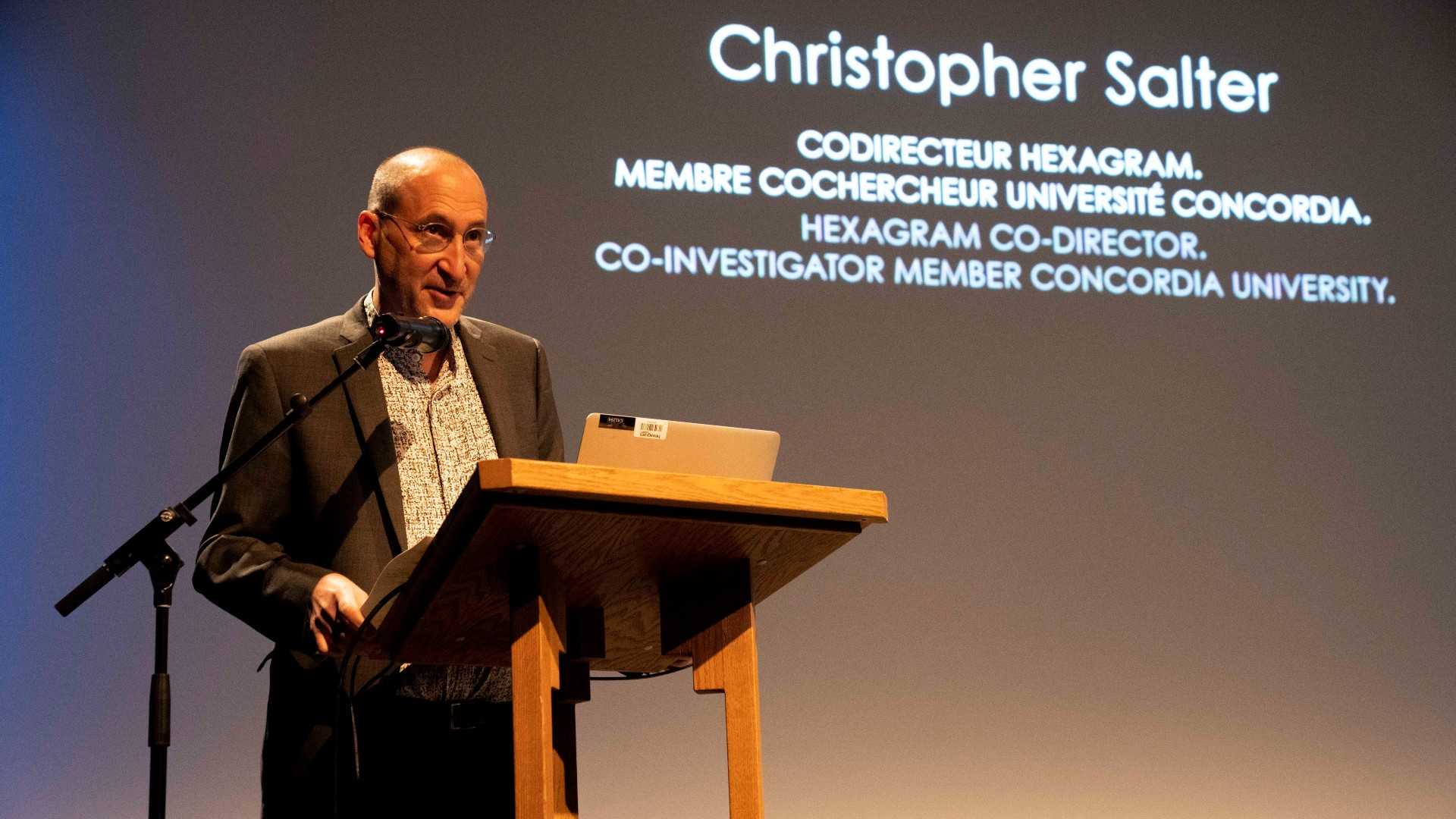 After 9 years as Hexagram co-director, Professor Christopher Salter has stepped down from the Network leadership as he left his faculty position in the Computation Arts department at Concordia University. Salter is now Professor of Immersive Arts at Zurich University of the Arts (ZHdK) and Director of the Immersive Arts Space at this institution.

Until recently, Salter was also Research Chair in New Media, Technology and the Senses at Concordia University, Director of the Hexagram Concordia Centre for Research and Creation in Media Art and Technology, and Associate Director Milieux Institute for Arts, Culture and Technology. Salter holds the longest tenure as co-director at the Network, from 2013 to 2022, during which he put in place local and many international partnerships that have become recurrent collaborations and are now valuable dissemination opportunities for our Network members, namely with Ars Electronica and ISEA.

Some of the most significant milestones in the Network’s programming were initiated or co-produced under Chris Salter’s leadership. In 2015, with Gisèle Trudel – then co-director Hexagram-UQAM, Salter co-organized the international conference Media Art Histories: Re-Create in Montréal. In 2018, a delegation of over 30 Hexagram members participated in the Ars Electronica campus exhibition “Taking Care”, in Linz (Austria). In 2020, Salter was co-chair of ISEA -Montreal on the theme Sentience, and in 2021, he initiated the EMERGENCE/Y Garden at the Ars Electronica festival, which launched the 2021-2022 edition of Rencontres interdisciplinaires d’Hexagram. This last event alone involved over 40 members of the Network.

A large publication on the same theme is currently under development, co-edited with Salter, also including contributions mostly by Hexagram members. Before his departure from the Network, last June, he joined fellow Hexagram Co-Director Sofian Audry (UQAM) and General Coordinator Manuelle Freire to present the EMERGENCE/Y program and future publication at ISEA2022 – Barcelona.

Through his own academic and artistic work, as well as his strategic foresight, and the international leverage he has given the Network, Salter has championed Research-Creation as a valid and valuable approach for academic and artistic production. Hexagram and its team would like to thank Chris for his important contributions to the Network throughout his mandate, and, more broadly, to the Québec Research-Creation community. Particularly, the current generation of emerging researcher-creators at Hexagram is greatly indebted to his teachings, mentorship, and the opportunities he facilitated. The many projects and activities he conducted often invited emerging researchers into renowned academic and cultural institutions worldwide, thus paving the way for future researcher-creators’ work to thrive.

He will remain involved with the Network as honorary and collaborator member. The process is underway to fill his seat; the new Hexagram co-director will be announced shortly.